Biotech is Just Getting Started as a Growth Industry

After 35 years of development, the biotechnology industry has finally refined many of today’s biotech tools to work effectively and safely for patients. In our opinion, the biotech industry is finally seeing multiple new technologies enter what we call the “zone of readiness,” where the underlying technologies are both technically and economically feasible.  In short, they are ready to be applied to a growing number of diseases, both rare and common. We touch on a few of these new biotechnologies in this blog.

While we share more on the history of biotechnology in our whitepaper, The Rise of Advanced Biotechnology in the Age of Genomics, the biotech industry has rapidly evolved over the past few decades from the approval of insulin in 1982. This evolution was built on applying early tools and techniques to create replacement recombinant proteins (such as insulin for diabetics) to more advanced technologies, including monoclonal antibodies with molecular targeting capability (for example, fighting cancer). More recently, we have seen gene therapy being developed (and even FDA approved) as a powerful treatment for genetic disease. We have come a long way.

The diagram below provides an overview of the evolution of biopharma technologies. The bottom half of the diagram shows the progressive development of various enabling tools, techniques, and building blocks. These enabling technologies are what led to the evolution of a growing number of technology or innovation platforms we show in the top half. Think of it as two ladders, the ladder of knowledge that leads to the ladder of technology evolution, with new rungs on the ladder now ready for adoption.

The key insight we are highlighting in this blog is that the top technology platforms in this diagram—antisense, RNAi, engineered cells, and gene therapy—are now ready to launch a wave of new therapies and growth for the biotechnology industry. In our view, this is not reflected in today’s biotech valuations. 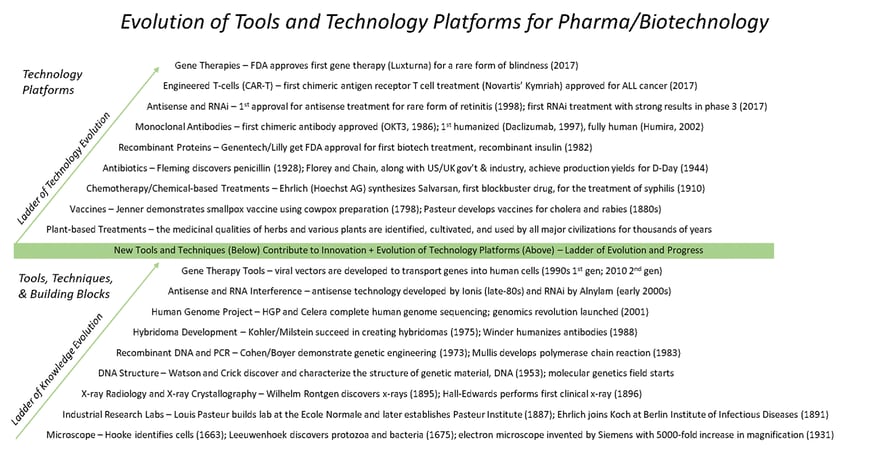 The ability to address disease at the genetic level—at the level of genes and gene expression—has been exceptionally difficult, despite its high potential for addressing both monogenic (single gene) and polygenic (multiple gene) diseases. However, the knowledge frontier has moved forward rapidly of late, contributing a variety of new tools and techniques to create not only technical but therapeutic feasibility for modulating genes and gene expression. Two technologies, in particular, are now generating strong clinical results modulating genes: 1) next-gen antisense technology and 2) RNA interference (RNAi) technology. Both antisense and RNAi are nucleic acid-based treatments, and both technologies have the power to downregulate or modulate the gene expression of functional proteins. This power to tune gene expression is of profound importance, and future generations of these technologies may address a growing array of diseases.

Both technologies have evolved through successive generations to arrive at a point where their clinical utility is now ready for mainstream adoption. Early antisense treatments were either degraded too quickly in the body, or required doses that generated unacceptable toxicity. Now, with next-generation chemical modifications, antisense treatments are more effective and becoming less toxic. The approval of Spinraza for the treatment of spinal muscular atrophy demonstrates that antisense has crossed an important threshold for utility in treating disease, particularly neurological and rare disease. In the article, “ASO Therapy: Hope for Genetic Neurological Diseases,” published in the JAMA medical journal, clinical neurologist Stefan Pulst, MD, at the University of Utah states, “One thing that drew me to ASO [antisense] therapies was that, having a gene defect in hand, ASO has offered the opportunity to directly target the primary cause of the disease, and I think that’s very attractive.”

RNAi technology is also on the threshold for widening commercial utility, as this modality has now shown very strong clinical results for TTR amyloidosis, another rare disease, as well as for high LDL cholesterol, a very common disease. The application of these treatments will likely broaden in the next 5-10 years, demonstrating ongoing important innovation in the biotech industry.

Gene therapy was theorized as a potential treatment for genetic diseases not long after DNA was characterized, but its development has been a difficult and tortuous one, marked by what initially appeared to be insurmountable hurdles. The idea of replacing faulty genes with functional genes in patient cells seems straightforward, until faced with the daunting reality of how to actually get genes into specific cells—all without causing genetic damage, inflammation, or inducing cancer. These hurdles seemed to throw a roadblock in the development of gene therapy when a patient died in 1999 during a clinical trial for a gene therapy at the University of Pennsylvania. The patient developed a strong immune reaction to the viral vector that was used to transport the genes into cells. What seems to be underappreciated, in our opinion, is that these issues have progressively been solved over time as gene therapy technology evolved through successive generations.

The newer breakthroughs for gene therapy have been multifactorial, but the critical ones were the development of next-generation viral vectors to deliver therapeutic genes, and the choice of which diseases and cells to target. For example, clinical data has shown remarkable efficacy and safety for newer gene therapies targeting hemophilia A and B. Next-gen gene therapies are also being developed for sickle cell disease, as well as a growing number of other genetic diseases.

Genomics Enhances the Power of Biotechnology

Lastly, another fundamental technology that contributes to biotech innovation is genomic sequencing. Now, with the cost of sequencing moving below $1,000 per genome, genetic research is experiencing a renaissance, leading to new knowledge about the genetic and molecular causes of many diseases.

A recent statistic showed that molecular and genetic data can also improve the probability of success for approval of new treatments. Data from a study by the Biotechnology Innovation Organization (BIO) showed that clinical trials that use biomarkers or molecular targets can improve the probability of clinical trial success from 8.4% (without biomarkers) to 25.9% when taking a new drug from Phase 1 to FDA approval. Genetic research also generates numerous new disease targets that biotech companies can address with new monoclonal antibody, antisense, RNAi, or gene/cell therapy-based treatments, and, in turn, sustain industry growth for many years to come.

While the biotechnology industry has come a long way in treating many diseases, there is substantial room for new innovation that treats many more diseases with unmet needs. This will fuel sustainable growth for biotech over the long term. Right now, we believe many of the stock valuations for select biotech stocks do not fully reflect this long-term potential. Long-term, and patient, investors that own a thoughtful and carefully selected collection of innovative biotech companies may be rewarded.

Interested in further reading on this topic? Download our full-length thought piece below: The Rise of Advanced Biotechnology in the Age of Genomics. 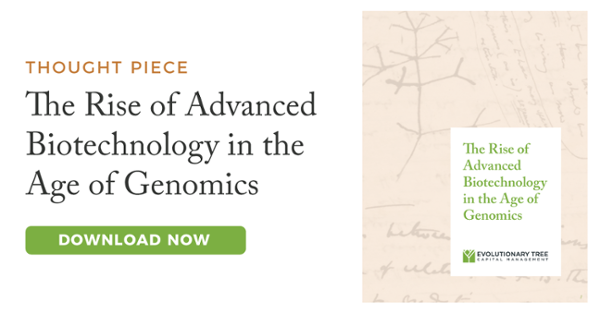 The information and views expressed herein are provided for informational purposes only and do not constitute investment advice. Past performance does not guarantee future results. Any projections, outlooks, or estimates contained herein are forward looking statements based on specific assumptions that are current as of the date indicated, subject to change without notice, and should not be construed as indicative of any actual events that have occurred or may occur. The inclusion of particular investments is not intended to represent, and should not be interpreted to imply, a past or current specific recommendation to purchase or sell a security and should be considered in the context of an overall portfolio. Investing in equity securities involves risk and principal loss is possible. Nothing contained herein constitutes investment, legal, tax, or other advice and should not be relied upon in making an investment or other decision. Investors should always obtain and read up-to-date investment services material before deciding whether to appoint an investment advisor.