Stick with Secular Growers Versus Chasing the "Re-Opening Trade"

While investors are focused on the topic du jour of the “re-opening trade,” we remain focused on longer-term opportunities represented in the portfolio, which are multi-year in nature and driven by the adoption of innovations and secular trends. These are the types of opportunities that will not only benefit from a strengthening economy but can also grow for years beyond that.

Despite the “Re-Opening Trade,” We Remain Focused on Owning Leading Secular Growers and Innovators

We believe the "re-opening trade" is short-term by nature and will play out in less than a year. In fact, many of the cyclical stocks have already rebounded nearly to levels seen in 2019, despite the fact that many of these industries will take longer to get back to even. And then, once cyclical industries get back to pre-COVID levels, many of these industries will slow dramatically. As they are not secular growers, they lack the fuel to sustain above-average growth beyond the initial rebound. Eventually, investors will look beyond cyclicals and return to the secular growers.

We believe many of the “re-opening trades” have seen the majority of the gains from the expected rebound. For example, United Airlines stock has rebounded about two-thirds of its value lost to COVID, but it will take years to gain back lost travelers, particularly business travelers who are the most profitable and can comprise up to about half of profits. Business travelers will, structurally, travel less frequently, as they will rely on a combination of web conferencing and more judicious use of travel in the future. It is just more efficient and cost-effective to use this hybrid approach.

Rather than relying on the typical short-term trading approach of shifting from one group of stocks to another group—say from “COVID stocks” to “re-opening stocks” for example–we remain consistent in staying focused on our long-term approach of owning companies that meet our 8 criteria and are positioned to grow over a multi-year period. We believe quality innovative businesses—both leading and emerging innovators—are best able to drive value creation when you stick with them over many years, as their innovations gain adoption over time.

While some investors believe that some of the secular growers that benefited from COVID may be impacted by the re-opening, we believe quite the opposite. We do not believe that a re-opening of the economy will cause a reversal of the direction of key secular trends across the portfolio, nor do we believe that it will slow adoption of key innovations. Furthermore, a general economic recovery can be positive for both cyclical and secular growth industries. By staying focused on secular growers, we believe investors can benefit from both the economic recovery and years of growth beyond the initial rebound.

Sticking with Innovators Positions You for the Future

One of the most important megatrends we are seeing across the economy—both in the U.S. and globally—is the changing mix of where innovation is happening. During the Industrial Era (much of the 19-20th centuries), innovation was driven by mechanical and later electrical innovations. With the shift to the Digital Era in the late 20th century and an acceleration of all things digital in the 21st century, an era we like to call the Age of Innovation, we are seeing an evolutionary shift to new sectors driving innovation. The two most important sectors are Technology and Healthcare, and patent data support this assertion.

While not every innovation is patented, many are, and patents serve as strong proxies for innovative activity. We pay attention to patent trends. See below for an analysis we performed using the U.S. Patent & Trademark Office (USPTO) database of utility patents going back to 1964, through 2012. It shows the growth of patents across Technology, Healthcare, and Industrials. We focus your attention on the growth in patents, which indicates the direction of innovation. While Industrials remains an important sector in total patents, it has experienced little growth in patents over the past 50 years. Technology, meanwhile, has seen an explosion in patents and is now by far the largest sector generating patents, and thus key innovations. Healthcare was barely represented in the 1960s, but has risen to become quite important. Notice that the growth in patents is similar between Technology and Healthcare and both have seen over 1,600% growth in patents since 1964, while Industrials has grown only 125%. 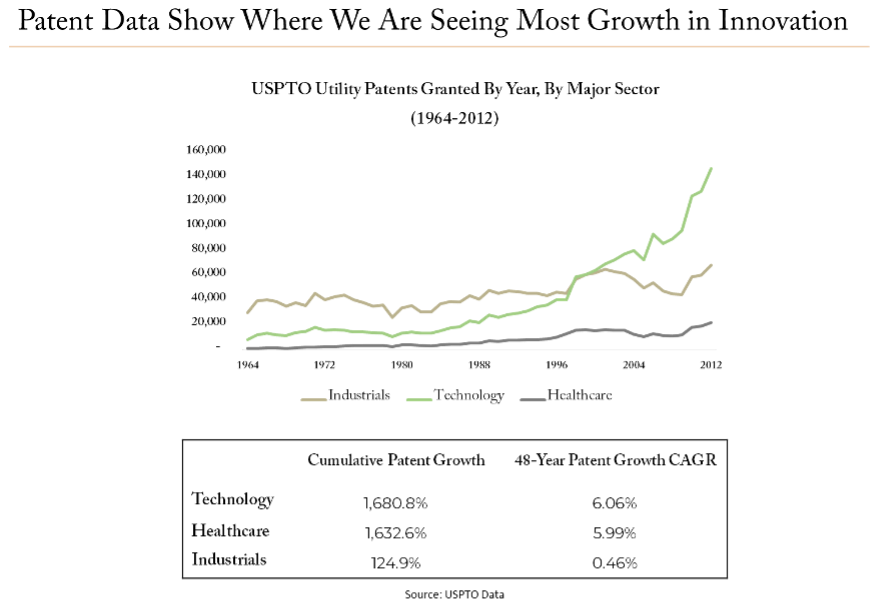 The “re-opening trade” is focusing investor attention (temporarily) on Industrials, but as we’ve shown in the chart above, this sector is not where society is seeing the most growth in new innovations. While we build portfolios bottom-up based on our 8 investment criteria, this patent data supports a portfolio that leans into Technology and Healthcare, among other sectors (such as Consumer), where the greatest amount of innovation is happening. Lean into the future, not the past. 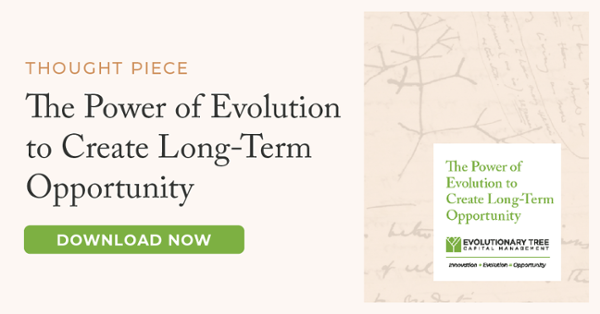 The information and views expressed herein are provided for informational purposes only and do not constitute investment advice. If performance is shown, it is based on a composite of actual trading in client accounts, but is not necessarily reflective of the performance of any individual client account. Differences in account size, timing of transactions, and market conditions prevailing at the time of investment may lead to different results, and clients may lose money. Differences in the methodology used to calculate performance may also lead to different performance results than those shown. Past performance does not guarantee future results. Any projections, outlooks, or estimates contained herein are forward looking statements based on specific assumptions that are current as of the date indicated, subject to change without notice, and should not be construed as indicative of any actual events that have occurred or may occur. The inclusion of particular investments is not intended to represent, and should not be interpreted to imply, a past or current specific recommendation to purchase or sell a security and should be considered in the context of an overall portfolio. Investing in equity securities involves risk and principal loss is possible. Nothing contained herein constitutes investment, legal, tax, or other advice and should not be relied upon in making an investment or other decision. Investors should always obtain and read up-to-date investment services material before deciding whether to appoint an investment advisor.